SWEARING IN NEW OFFICERS FOR 2017
CHINESE NEW YEAR LUNCHEON BUFFET
HONOR FLIGHT
On May 20 2017,  I was privileged to join with 68 other veterans of WW 2 and Korea on the Hudson  Valley Honor Flight to Washington, DC. It was Armed Forces Day.   We met at Westchester County Airport for a ceremony surrounded by hundreds of cheering family,friends and military.    The flight to Reagan National in DC. was met by a large welcoming group.   We were bused to the World War 2 and Lincoln Memorials. We then toured  the Vietnam and Korean memorials. Many emotions flowed from the group.    Thank you for your service echoed all day long.   Motorcycle escorts were with us as we circled the Iwo Jima memorial on the way to Arlington Cemetery.  Hushed, respectful, and solemnity at this ceremony. The rows of headstones were moving to all. After dinner at a hotel we flew back to Westchester. We were  again welcomed by cheering friends, family and others, chanting USA USA.  A tearful,emotional, humbling incredible and unforgettable day.   I was fortunate to be a part of it.

At the September 26 meeting, Paul Abramson was recognized as the “2017 Man of The Year” for his many contributions to the Old Guard. He received a plaque, and his wife and daughter, who arrived at the exactly correct moment, were presented with corsages. The award was also announced at the Dinner Dance two days later to reach as many members and wives as possible.

Paul joined the Old Guard in 2009, and quickly got involved in almost everything. He joined bowling, and revolutionized the sport by introducing an “age-adjusted” score. He suggested to the then-President an idea for a discussion group that became Timely Topics. He was elected to the 2011 Board of Directors and progressed from “At-Large” through 2nd VP and 1st VP/Program Chair to President in 2014.

Paul believed that once someone joined, we have an obligation to remember him as part of the group even if he moved away or resigned. This led Paul to start developing ways of staying in touch with those he called Alumni.

As provided in the Bylaws, Paul became part of the Nominating Committee in 2014, became Chairman in 2015, and still has two more years on the Committee.  If you get a call from him, you are expected to say YES.

There came a time that it was necessary for the Old Guard to leave MUMC and find a new meeting place. Paul was an essential member of the search committee and an active member of the committee to move all our belongings; and then after a couple of years, repeated the entire process as we went from the Woman’s Club to Ethical Culture. To do this once is stellar; twice is heroic. He is now believed to be one of two people who have a key to every room we use.

The “Man of the Year Award” is misnamed. Each year, the prior winners of the award select a member who has made a significant contribution to the Old Guard over several years, not just the past year.  Paul Abramson is the 42nd Man of The Year, and joins a distinguished fraternity.
Old Guard Apple Picking at Outhouse Orchards 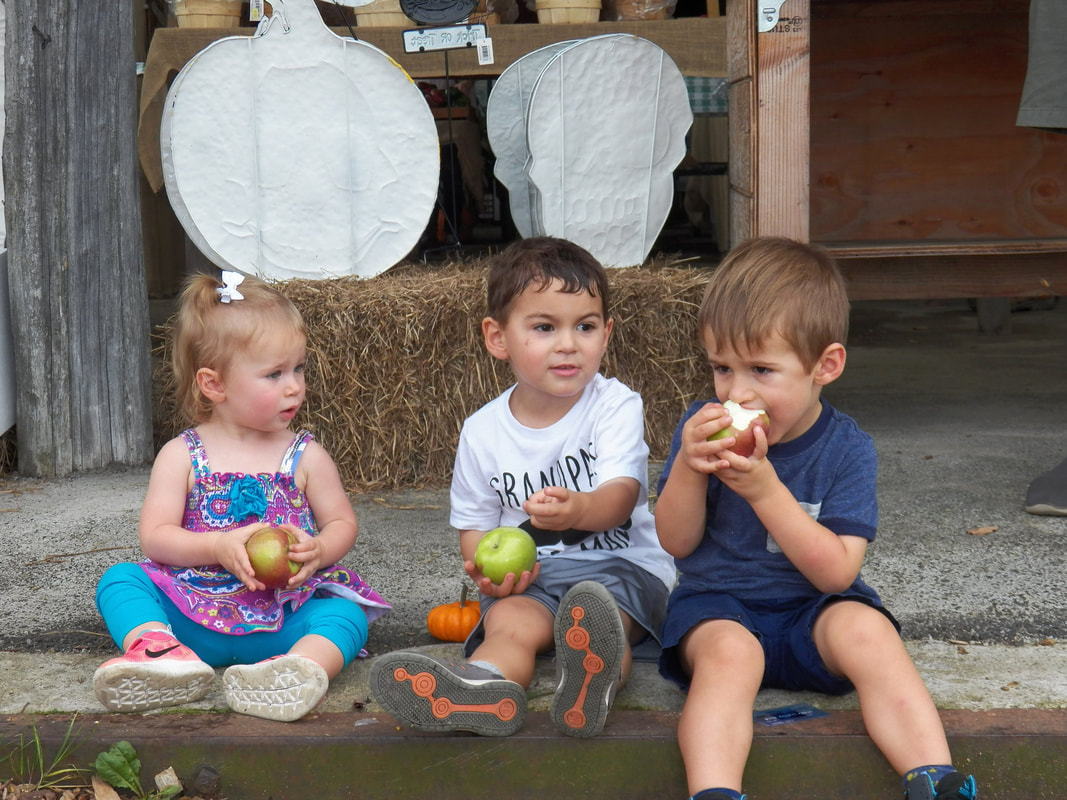 The sky was blue, the apples ripe, the pumpkins golden orange, as members of the Old Guard, along with their grandchildren, enjoyed a day out at Outhouse Orchards in Somers.  Warm donuts and cold apple cider were provided at the Old Guard table set up next to the farm stand.
OLD GUARD OF WHITE PLAINS